In order to build a body that is worth envying, you will have to learn how to pack on some lean muscle mass.  Most know that lifting heavy weights builds muscle, but far less know the science behind what foods build muscle.  You see, nutrition is probably just as, if not; more important than your workout regimen.

If you want to skip the deep dive on what foods build muscle then check out the list below of the top foods that help you build muscle:

You are what you eat

Muscle is made of protein. Therefore, you have to consume protein to put on muscle.

And protein is a polymer of amino acids

Amino acids are the building blocks of proteins. There are 20 different amino acids which are either essential or non-essential. Essential amino acids cannot be made by the body. Therefore, they must come from our diet.

When it comes to putting on lean muscle, the term “nitrogen balance” is something you should be aware of.  Nitrogen enters your body when you consume amino acids. Nitrogen also exits the body as ammonia, uric acid, and urea as waste.

How Much Protein Do You Need to Eat to Build Muscle?

Not only does what you eat matter, but how much you eat.  If you want to build muscle, then you will have to eat an adequate amount of protein.

There are few different schools of thought on how much protein one should consume to build muscle. Some say 2 grams of protein per kg of body weight is the proper metric, others think just 1 gram of protein should be consumed per pound of kg.

What does the scientific literature say?

It seems there is an optimal protein intake for maintaining muscle.  One study conducted showed that after getting to a level of 1.2 grams of protein per kilogram of body weight, any excess protein did have much of an effect on muscle gain.

Another study showed that the optimal amount of protein that should be consumed if you want to gain muscle is approximately 0.68 grams of protein per pound of bodyweight.

And remember too much of a good thing can be bad.  If you eat very high levels or protein, like in the 250 grams range, you can cause damage to your kidneys.

When it comes to putting on muscle something to be aware of is “Net Protein Utilization, or NPU. NPU is the ratio of amino acid mass converted to proteins to the mass of amino acids supplied”

So basically it’s a measure of how many amino acids get converted to proteins versus the total amount of amino acids consumed. It’s measured experimentally by determining the total dietary protein consumed compared to the total nitrogen that is excreted from the body.

Here’s an example- let’s say you ate a steak that contained 100 grams of amino acids.  By using the experimental measuring methods mentioned before we can determine how many amino acids were excreted from the body and compare that number to the 100 grams consumed.

Let’s say we discovered 11 grams of amino acids were excreted from the body.  That would make the beef/steak’s NPU 89%, .89, or 89.  The closer to 1 or to 100, the more efficient that particular food source is at being converted into protein.

Besides Net Protein Utilization there is also another measurement called Protein bio-availabity.  NPU and protein bio-availablity are virtually the same thing; both measure how much protein is utilized/absorbed in the body. 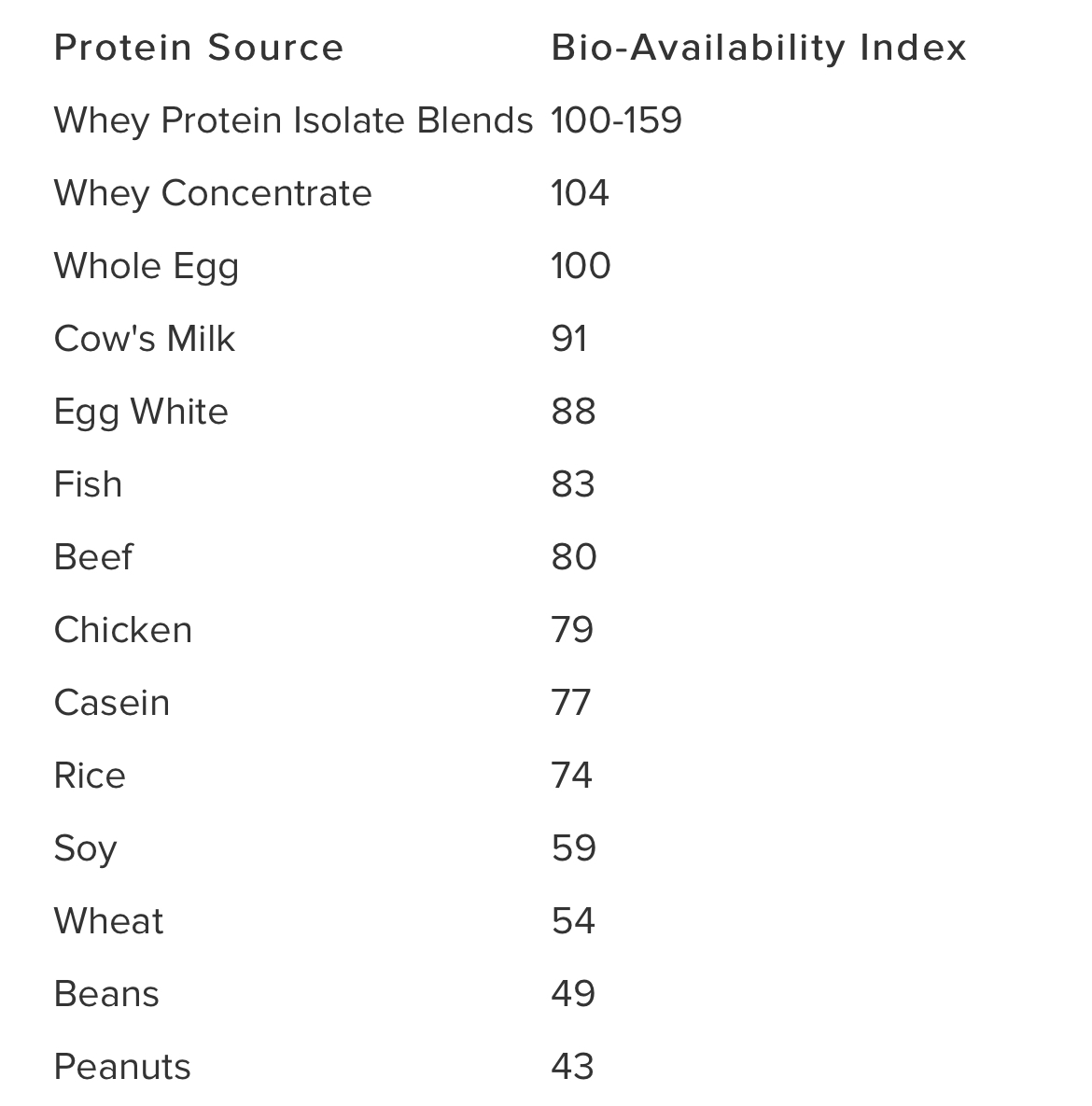 As you can see, whey protein, eggs, milk, fish, beef, chicken take the top spot for the most bioavailable forms of protein.

Leucine is a particular important amino acid for building muscle. This is because studies have shown that Leucine promotes protein synthesis.  Leucine is an amino acid that can be found chicken, beef, pork, fish (tuna), tofu, canned beans, milk, cheese, squash seeds, and eggs. You can supplement with leucine as well.

There are a few different schools of thought with how insulin affects muscle growth. Originally, it was thought that insulin was key to any type of anabolic process in the body. However, now, some studies may show that increasing insulin levels by eating carbohydrates post workout may not have an effect on protein synthesis.